Beautiful Croatia has its moments during the entire year. You are able to enjoy all 4 seasons here, so it is up to you and your preferences. Croatia is very touristy and of course, from June to September, a lot of people will be circulating in the most touristy destinations, including Split.

One would argue that summer is the best time to visit Split, but not necessarily.

Low season is a wonderful time to enjoy the sights of Croatia, when the crowds are fewer and prices lower, including Split. In this post we are giving you some tips and advice for travelling to Split in any time of the year.

You will also read about the weather in Split and a weather guide for Croatia in general.

What is the best time of Year to go to Croatia?

People often wonder about the best time to visit Croatia, but it is actually all about one's preference. If you really must go to the beach and enjoy beach activities, then summer it is.

If you really just want to explore Croatia for its beautiful nature and rich history, then you can visit basically anytime. Below you can read more about each season in Croatia, that mostly apply for city of Split and coastal cities, since most people visit Croatia to explore those.

But still, the climate is pretty similar throughout the entire surface of Croatia.

What is the rainy season in Croatia?

The rainy season in Croatia is considered to be mostly in Autumn and a bit during Spring.

For example, in Split the rainy season is during May and October. However, there are some exceptions, but those are the parts of the year with most rain.

In some places there is less, and in other, there is more rain.

Summer is very hot with barely any rain and it is safe to say that it is the season with no rain at all, throughout the entire surface of Croatia.

Can you swim in Croatia in June?

Yes, of course you can swim in Croatia in June. June is the month that most locals have already began to enjoy the first beach days anywhere in Croatia, especially in Split and on the islands.

High season in Croatia, and Split in particular are considered to be months of June, July, August and September. Croatia became more popular in the last 5 years or so, so the high season period expanded to almost full 4 months. The weather in this time is just amazing, especially in Split.

Almost all the time you can enjoy sunny days to walk around and explore the sights, plus you can go to the beach and have a full Dalmatian experience. Sometimes it can happen that May gets a bit rainy, but when it’s not, locals start to go to the beach when May 1st comes! The water is amazing all up until September.

If you end up in Split, and it’s raining, don’t fret, it still isn’t cold enough to stop you from going to old town and explore the Diocletian’s palace.

On lower temperature days, we usually go to the beach in the middle of the day, at noon, when it’s the warmest. When it’s a typical hot summer day, we tend to go very early in the morning, or after 4 PM.

Always bring sunscreen, no matter the time you plan on going to catch some rays of sunshine.

How to pack for high season in Split, Croatia

Summer in Split is a typical hot summer. You really need to bring a lot of (or should we say, just a little) light clothes. Temperature goes up to 40°C (104°F) and most people find it refreshing to jump in the sea.

Almost all areas in Croatia that we know of are fully air conditioned, but we do feel like you should go out or go swimming to enjoy your days in Split, and not spend them indoors (unless you are visiting a museum or you went shopping).

You can always pack according to your lifestyle, bring a book or a portable video game console, it's up to you. But there are some things everybody must bring with them.

So here are some tips for you:

- Bring sunscreen, sunglasses and light shoes to walk around. A hat as well if you like them

- For the beach, bring a bathing suit and flip flops – it's almost a rule to walk to the beach in flip flops, rarely anybody goes to the beach wearing sneakers

- If you like exploring the sea and you like to go on not so much popular beaches, consider bringing some water shoes with you (they are useful while visiting waterfalls as well!)

Where is the best place to stay in Croatia?

Depending on you plans for visiting Croatia, there are a lot of option to choose from. Firstly, you have to decide what region you would like to visit. After that, you have to plan your budget for your accommodation of choice.

Private apartments and rooms are very popular in Croatia, so feel free to book a room or an apartment in a city center, rather a room in a typical hotel.

If you prefer hotels, by all means, book one. Reviews are a safe place to go check out some recommendations.

For staying in Split, we would recommend Royal suites or Royal suites Sky - both are located on the ideal part of the city center, where old town is close, but Bačvice beach is also close. All areas are reachable by foot!

The low season in Split is consider to be in moths of March, April, May and October. Low season doesn’t necessarily mean that the weather is terrible, it just means that people are less likely to visit Split and Croatia in general, since the swimming season is still not open due to a bit lower temperature.

When you go on a vacation to Croatia, it is best if you also experience a typical summer day and the beauty of greenery and sea side (beaches and islands). If you are coming from a country with a sea side, you might not be feeling too much FOMO for not visiting during summer.

In spring the nature is just starting to bloom and blossom, people are starting to wear lighter clothes and go everywhere by foot if possible, to enjoy some nice fresh air. There are no crowds, prices are much lower and you can basically explore the historic parts of any place you'd like and go to the beach to chill at a bar.

Locals tend to go to the beach very early in the year, sometimes even in February if it’s sunny, to sit down at any bar and just enjoy the view of the blue sea.

How to pack for low season in Split, Croatia

For low season in Split, feel free to dress in layers. Weather gets nice and light clothes is often times enough, but you never know when ‘Bura’ will hit – the famous strong Dalmatian wind. If you walk around or sit on the sun, you will feel warm, but other than that it still gets a bit cold.

Bring an umbrella or a raincoat just in case and bring some nice comfortable shoes for walking around. Split is small and you can walk through a lot of places, especially if you decide to climb the Marjan hill – which is a must while visiting Split!

So, just to recap:

- Bring clothes to dress in layers

- Bring comfortable shoes for walking around

Wintery/cold months in Split, Croatia are considered to be the months of November, December, January and February, but keep in mind that there is no rule which of these months would be the coldest or most rainy.

We had times when Christmas was so sunny, and times when snow fell for a few days in February. Still, we would say that those situations are exceptions and that winter in Split is a mild one. It is doable to walk around and explore the city and Marjan hill.

Bonus info is that during winter, there is a great possibility that the Plitvice lakes will be frozen and magical and it is a great idea for a day trip from Split!

Also, in December, the city is decorated in a Christmas spirit and you can stop at any bar of café bar to have a nice cup of hot wine (they cook the wine with nice spices and flavors) and to get some sausages and street food.

You will also find an open ice-skating place to go and have some fun in the city center.

Does it snow in Split Croatia?

It rarely ever snows in Split, Croatia. It happens every 4 years or so. The snow usually stays on the ground for only 2 or 3 days anyways. So, you are safe in case you want to visit Split during winter, but don't want it to be snowy.

In case you would actually like to enjoy snow, you can be sure that there will be snow on surrounding mountains such as Mosor or Svilaja, that you can easily reach by car or by bus. You can consider it to be a day trip to a snowy Dalmatian mountain. 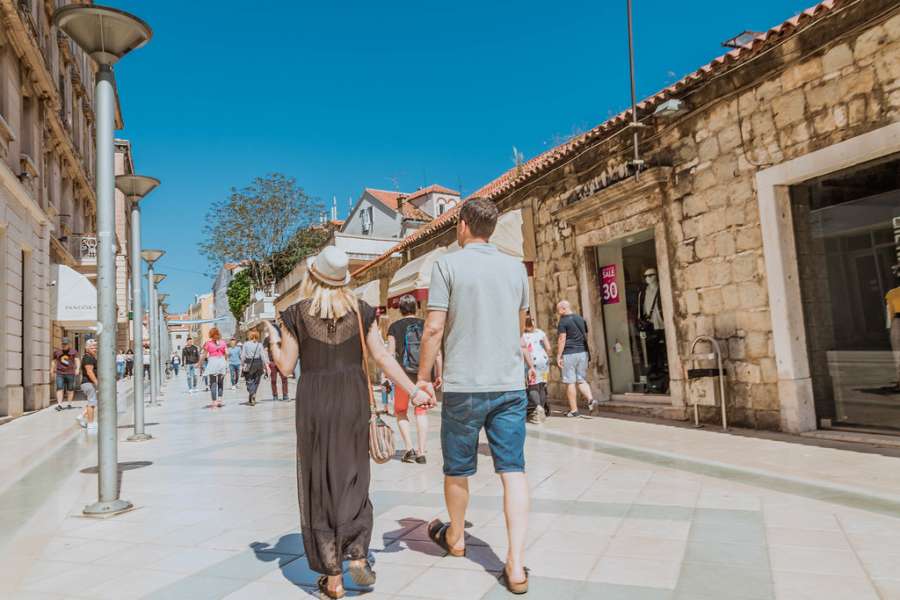 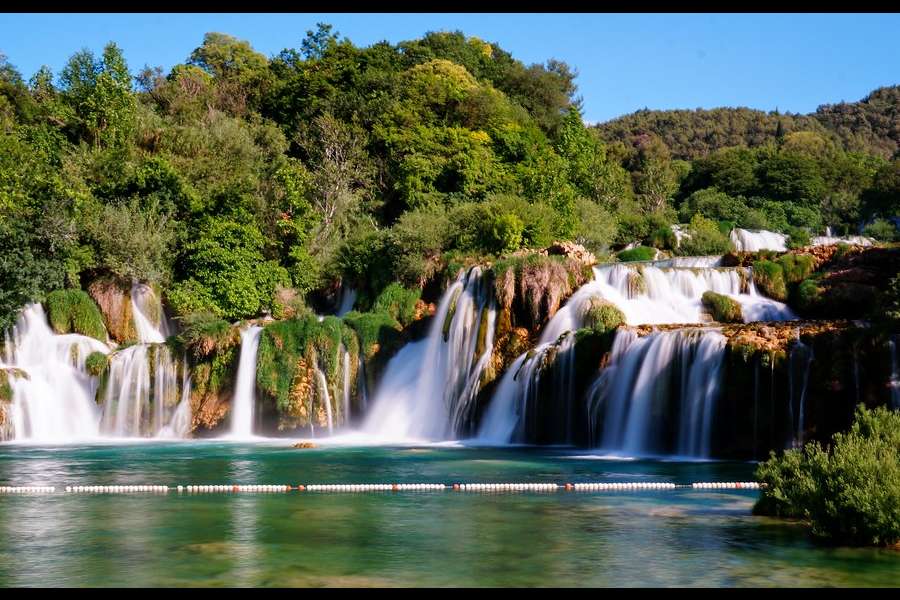 Plitvice or Krka waterfalls? | Which is better? 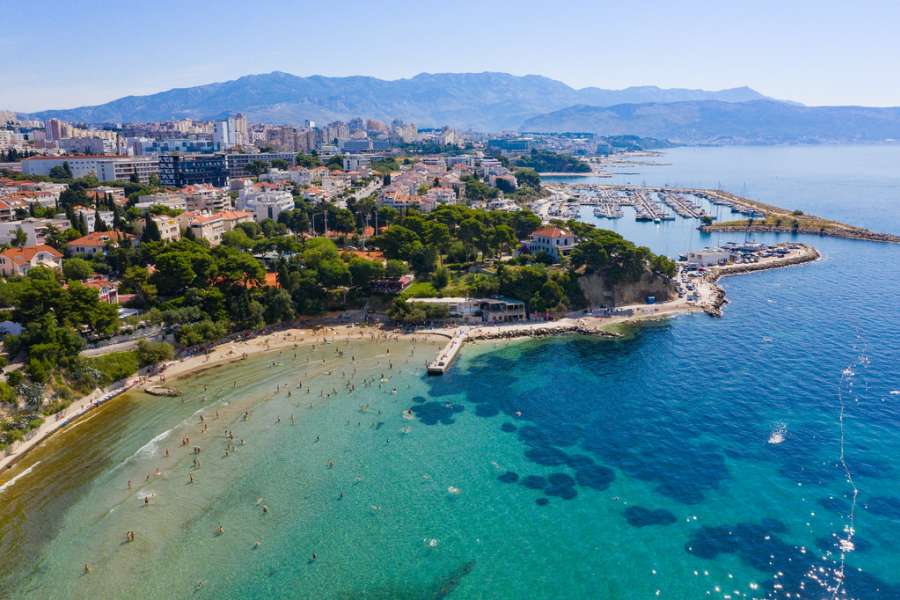